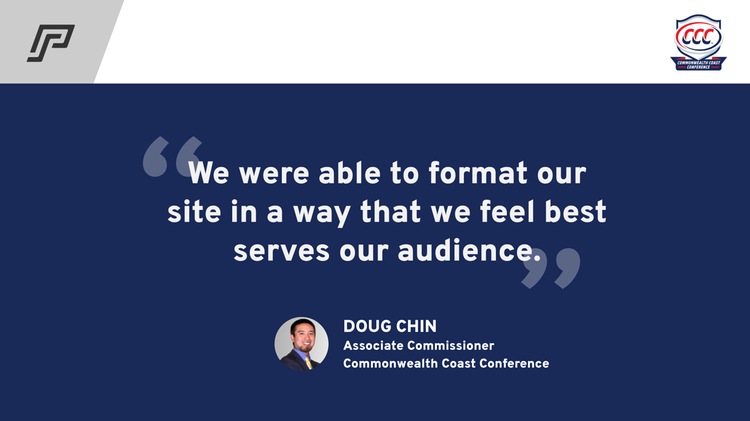 “I guess it just makes everything better.” That’s what Doug Chin, Associate Commissioner, Commonwealth Coast Conference says about PrestoSports. “I don’t know that we’re doing anything groundbreaking. When we were working on the redesign,  one of the priorities for us was making sure that we had a simple design so that people could find the things that they’re looking for. For a conference site, that’s statistics, awards, history, things like that. We wanted to make sure that we were prioritizing all of that. When we were going through our redesign, that was something that we put at the forefront and the people that we’re working with made sure that we were getting exactly what we were looking for. We were able to format our site in a way that we feel best serves our audience.”

Gregg Kaye, Commissioner for the conference is pleased with the flexibility of the platform as well. “It’s nice that Doug has the ability to build things on his own simply by just going in and coding it or creating a template that he likes to use,” he says. “If we didn’t have the ability to create those things then it would, it would probably be a challenge cause you’d have to rely on support to be able to do those things. And I don’t know that it’s really creative, but we’ve also been able to use the awards platform for other things that aren’t necessarily tailored towards awards or at least awards that we’re giving out. If we’re voting on officers for our SAAC for example, our student-athlete advisory committee or things of that nature, it’s a really good way to get people the information that they need to collect and tabulate the results.”

“It also gives folks the opportunity to see what goes into the things that we do.” Gregg added. “If you’re a student-athlete or a coach, you may not really have a lot of that experience. So the more you can get people on the site, the more you can get people logged in to be able to access the award system the more they understand. It’s good training for them when you need to turn around ballots and things pretty quickly.”

As Doug puts it, “I think our approach has always been bells and whistles are great, but if there’s too many of them, it all gets lost. Then none of them are utilized. I think it’s great to have all those things available to people that are able to use them in whatever way they see fit. But for us, it just seemed like a simpler design, maybe having some of those bells and whistles, and maybe having them hidden in different places on our website was more beneficial for us.”

Hear the Commonwealth Coast Conference Leaders in their own Words

Hear from Other PrestoSports Customers

Customer Spotlight
Get A Demo
Previous
Next