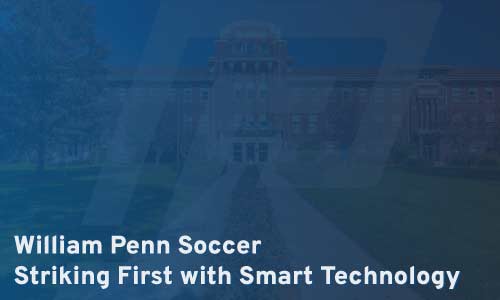 When Simon Brown took the helm of the William Penn soccer program in 2020 there was a lot of uncertainty. However, one area where he didn’t have any doubts was that technology would play an important role in recruiting to continue building the program and increasing interest in the program. We caught up with Coach Brown to get his take on the challenges of building a program today.

How did COVID impact your recruiting?

It didn’t really change for us. We have a lot of internationals. Most of the stuff we’re seeing with them anyway is film online, through the recruiting services.  I think that’s 90% of our recruit when it was beforehand. I don’t think that will change. What it did probably was force kids to get game film. American kids that couldn’t come up for visits, it forced them to get their films and make it a little bit more professional so they’re more marketable. And I think the same thing with junior college kids. So normally we’d go watch those games, but they needed to have film for the game. So they weren’t relying on being recruited in person.

How much do you rely on your website for recruiting?

It’s the first thing that people look at when we’re recruiting them. So if I am using a recruitment agency, or if I contact the kid, I know that the first thing they’re going do is look at the website. The second thing is probably to look at the social media. They’ll be on William Penn University, Instagram, Twitter,  all that. We’re trying to make that look as professional as possible because we know that’s gonna be the first thing that they look at. Then all within that, our website has a recruitment element. There are links for them to sign up and answer a couple of questions. Then they’re automatically our database and they can start, um, we can start recruiting them. So yeah, the website is very important.

What would you say about your website’s appearance?

Our SIDs do a fantastic job of keeping up with that.  I know when I’m looking at it, it always looks top-notch. I think the ease of use is perfect.

How do you get information to your SIDs?

Being at a small private school, our SIDs are very accessible. There’s a head SID and there are three graduate assistants that work under them. And then usually we have one dedicated per season. There’ll be an SID for football, for volleyball, for soccer, because we’re all in season. Then the same thing as soon as basketball starts, with basketball, and wrestling, they’ll have their own SID. For instance, when we went to the National Tournament this year, we are fortunate enough to bring a grad assistant, Jordan, with us. He’s a grad assistant,  with the sports information program. He was doing video logs, all the social media. We’re very fortunate because I know that a lot of other schools don’t have graduate assistant programs with the sports information directors.

What are some social media trends that you’re seeing?

I think one of the trends that is starting to creep into soccer that we’re seeing with the American-based kids is they’re piggybacking on what football has always done with a ‘great visit at William Penn University’ type-post, ‘Great time to meet the coaches.’ Here’s a picture with my gear on, thank you for the opportunity, or just received an official offer. I think five, six years ago, I would just see that on Twitter and I would see football doing that. Now it’s starting to creep into basketball and we’re starting to see soccer, kids do it. Now when we have soccer kids that come and visit we’ve started to incorporate it into our visit day. When we have a large visit, which we do once a month, where we have 10 kids that we’re recruiting for this year, next year, whatever, we give them our gear, whatever number they want, and they can take pictures of it. If they do end up signing, they already have a picture in their uniform. We never did that before. They want the exposure. They want people to know that they’re getting recruited, which is good for them. And it’s all part of of their journey.

Have you made any changes because of NIL and how has it impacted your program?

We have. There’s a designated person through there that has contacted us and then that we had some meetings last year about it. I think what we’re gonna see will be on a smaller scale with local companies. So we have a local coffee shop here. They may have a kid that endorses it for a day and they get a hundred dollars worth of gift cards. Our kids aren’t making bank off it at a small private school. I think that’s it’s just to let the kids know the opportunity exists. We have to understand what we can do for the kids too. It’s going to turn into a massive recruiting tool if I can get you to come to my school and I have this opportunity set up for you.

What do you think will be the long-term impact of social?

What I think is gonna happen is the kids that have already a massive social media presence themselves will become more recruitable. Because then if I recruit a kid that has a hundred thousand followers, then it just makes my program more marketable without me having to do anything. So I may take that kid in, he then posts that he’s at William Penn doing all this stuff. Maybe he has a blog. Maybe he has a YouTube channel. All those things are different opportunities where he can start to make money off his personality. Then we can start to make our program more marketable too, and open our program up to a network that we probably never would have otherwise.

There’s no doubt that the playing field is changing all around every program and sport, and that technology will play an increasingly important role in success. From recruiting to funding, combinations of technology is what will ultimately set programs apart and make a difference. Learn more about how PrestoSports is setting programs up for success in everything from websites to streaming to social media.

Get A Demo
Previous
Next